At United School of Panama, we believe that everyone has the right to learn and develop in a safe, nurturing environment, where anti-social and bullying behavior is not tolerated. We are committed to providing a caring, friendly and safe environment for all of our students so they can learn in a relaxed and secure atmosphere. If bullying does occur, all students should be able to tell and know that incidents will be dealt with promptly and effectively.

We take seriously our commitment as global citizens by instilling a sense of responsibility, courage and compassion in our students. This enables them to make positive contributions towards making our community and the wider world, free from fear and intimidation.

The anti-bullying policy is linked directly to the USP golden rules and in particular:

Therefore, it is essential that all members of the school community understand and abide by the policy, and model respectful behavior in all situations. This encourages and empowers all members to be proactive in creating a positive sense of community and responsibility so that the opportunities for bullying to exist are minimum.

Bullying is defined as behavior that is deliberately and repeatedly:

It takes many forms and can include: violence, teasing, threatening words or behavior, name calling, ridicule, spreading unpleasant stories and cyberbullying (see Appendix 1).

Students who are being bullied may show changes in behavior i.e., becoming shy and nervous, feigning illness, taking unusual absences or clinging to adults. There may be changes in learning behaviors, i.e., a lack of concentration, withdrawal from activities, etc.
All staff need to be aware of these possibilities and report promptly any suspicions of bullying to their supervisor. Students are also encouraged to report incidents of bullying.

We aim to prevent bullying by:

All reported incidences of alleged bullying will be taken seriously, recorded and thoroughly investigated. A copy of the report should be given to the Academic Director, even if no further action is deemed necessary. The initial investigation will normally be carried out by the class teacher of the alleged victim, or for serious allegations, a senior administrator should be involved from the start. Any incident of bullying that has been dealt with should be followed-up with both the victim and the bully, to ensure that it has not restarted. This should be done by the Academic Director or a coordinator. Follow up checks will be performed to ensure that the situation has been resolved.

Action to be taken when bullying is found to have occurred

The action taken will be dependent on the outcome of the investigation but will involve both the victim and the perpetrator. Consequences will be determined upon each situation. It may involve applying sanctions against individual students that are consistent with the School’s Behavior Policy.

The school will review this policy annually and asses its implementation and effectiveness. Safe environment policies will be promoted and implemented throughout the school.

APPENDIX 1. What are the different types of bullying?

Bullying can take many forms but it usually includes the following types of behavior.

Physical: Hitting, kicking, pinching, punching, scratching, spitting or any other form of physical attack. Damage to or taking someone else’s belongings may also constitute physical bullying.

Indirect: Spreading falsehoods about someone, exclusion from social groups, being made the subject of malicious rumors, sending abusive mail, and email and text messages (cyber bullying).

Further information about specific types of bullying related to race, religion or culture.  A high proportion of bullied students have experienced racist or faith-based bullying. When an ethnic minority child experiences bullying it is more likely to be severe bullying.

Bullying related to appearance or health conditions: Those with health or visible medical conditions may be more likely than their peers to become targets for bullying behavior. Perceived physical limitations, such as size and weight, and other body image issues, can result in bullying.

Bullying related to sexual orientation: Evidence of homophobic bullying suggests that children who are gay (or perceived to be) face a higher risk of victimisation than their peers. Homophobic bullying is perhaps the form of bullying least likely to be self-reported, since disclosure carries risks not associated with other types of bullying. A student may not want to report bullying if it means ‘coming out’ to teachers and parents before they are ready to.

Sexist or sexual bullying:  affects boys as well as girls. Boys may be the victims of their own sex. Sexual bullying may be characterized by name-calling, comments and overt ‘looks’ about appearance, attractiveness and emerging puberty. In addition, uninvited touching, innuendos and propositions, pornographic imagery or graffiti may be used. Students identifying as transgender or experiencing gender dysphoria (feeling that they belong to another gender or who do not conform with the gender role prescribed to them) can also be targeted by bullies.

Cyberbullying
Cyberbullying includes bullying via text message, via instant-messenger services and social network sites, via email, and via images or videos posted on the internet or spread via mobile phone. It can be used to bully for the same reasons as other forms of bullying e.g. race, sexuality, disability etc.

Key advice to parents on cyberbullying
When a child is the target of cyberbullying, bullying via mobile phone or the internet, they can feel alone and very misunderstood. It is therefore vital that, as a parent or guardian, should look to support your child if they are caught up in cyberbullying. Hopefully, this short guide will help you.

Prevent cyberbullying – Where to start
The best way to deal with cyberbullying is to prevent it happening in the first place. Although it may be uncomfortable to accept, you should be aware that your child may as likely cyberbully as be a target of cyberbullying, and that sometimes children get caught up in cyberbullying simply by not thinking about the consequences of what they are doing.

It is therefore crucial that parents speak and educate their child, and understand the ways in which they are using the internet and their mobile phone. In this guide there is an anti-cyberbullying code which contains eight key messages for children, which you may find a helpful starting point for a discussion with them about issues.

Use the tools
Most software and services on the internet have in-built safety features. Knowing how to use them can prevent unwanted contact.

Responding to cyberbullying
It is vital that you have strategies to help your child if they come to you saying that they are being cyberbullied.

Keep the evidence
Keeping the evidence of cyberbullying is helpful when reporting an incident and may help in identifying the bully. This means keeping copies of offending emails, text messages or online conversations.
B. Key Advice to children and young people on cyberbullying

Anti-cyber bullying code
Being sent an abusive or threatening text message, or seeing negative comments about yourself on a website, can be really upsetting. This code gives you eight important tips to protect yourself and your friends from getting caught up in cyberbullying, and advice on to how to report it when it does happen. 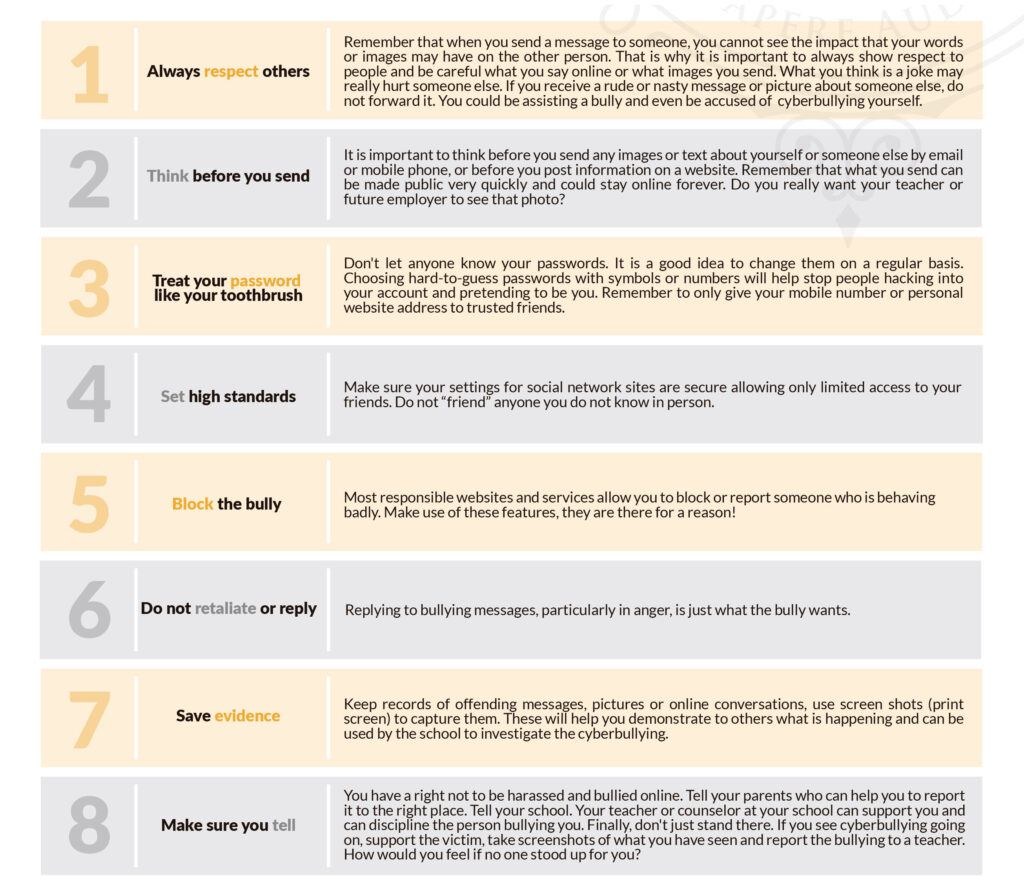